Subscribe to Our Newsletter
By fearfuldogsPublished On: August 15th, 2014 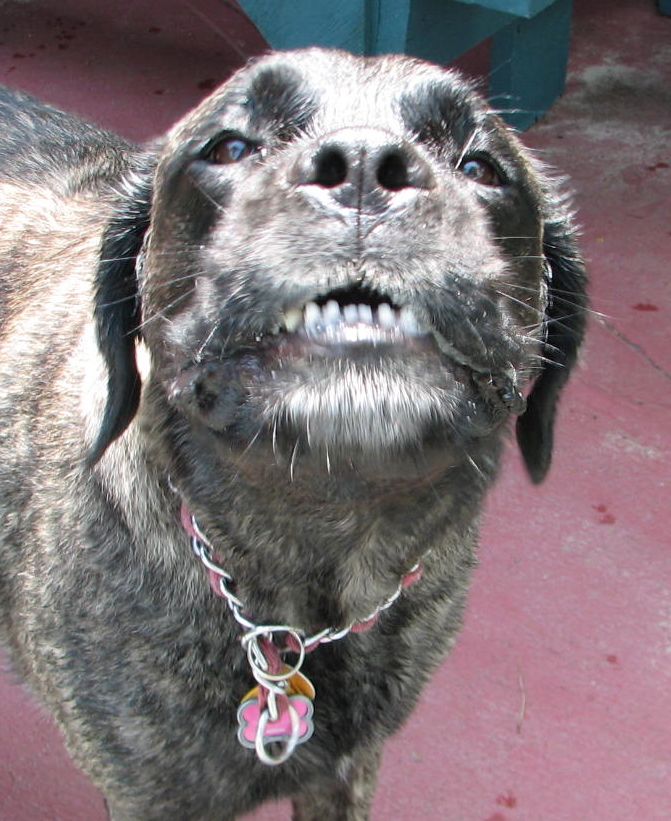 The older one gets the less in life seems to surprise us. One of the things that should be no surprise to any of us is for a fearful dog to behave aggressively. Aggression is a normal and predictable response to see in animal who is afraid, often terrified, for their life. Brains are designed so that if an animal is experiencing fear, behaving aggressively–as opposed to taking a deep breath and suggesting that other solutions to the current problem might exist–will happen quickly. It might save an animal’s life. Spend a few extra seconds not fighting back and you might be lunch.

One of the main goals for anyone working with a fearful dog is to never put the dog into situations in which aggression becomes necessary from the dog’s perspective. By keeping a dog feeling safe, however that needs to be sorted out for an individual dog, will help prevent the demonstration or escalation of aggressive behavior. If a dog is troubled by people coming into the house we can be proactive and put the dog away in another room where they are safe, have something yummy to chew, and the scary event can occur without any drama.

The next steps we take address how the dog feels about the scary event. We do this by using desensitization and counterconditioning. Change how the dog feels and you generally will see a change in how they behave. Counterconditioning is a straightforward process, but misunderstood enough that people, including dog trainers, get it wrong. Getting it wrong leads to the idea that it doesn’t work. And when this happens people move on to to less effective ways to work with fear based behavior challenges.

Concurrently we begin teaching a dog something else acceptable to us to do. We should take pains to make sure it’s acceptable to the dog too. Going and sitting in a crate when people come into the house can work for both the dog and the owner if the dog feels safe in their crate. Asking a dog to sit quietly while scary monsters pet them is not likely to be acceptable to the dog as much as it makes us feel accomplished and successful. The way we help dogs learn new behaviors and continue helping them learn to feel good about the scary stuff is by using positive reinforcement to train them. By running to their crate when guests show up a dog learns that a favorite delicacy is delivered. It’s worth running to their crate when company comes.

Many of us did not break the dogs we are living with, but we can put the pieces back together again. Keep them feeling safe, desensitize and counter condition to triggers and give them skills using good positive reinforcement training mechanics.