Subscribe to Our Newsletter
By fearfuldogsPublished On: June 23rd, 2011 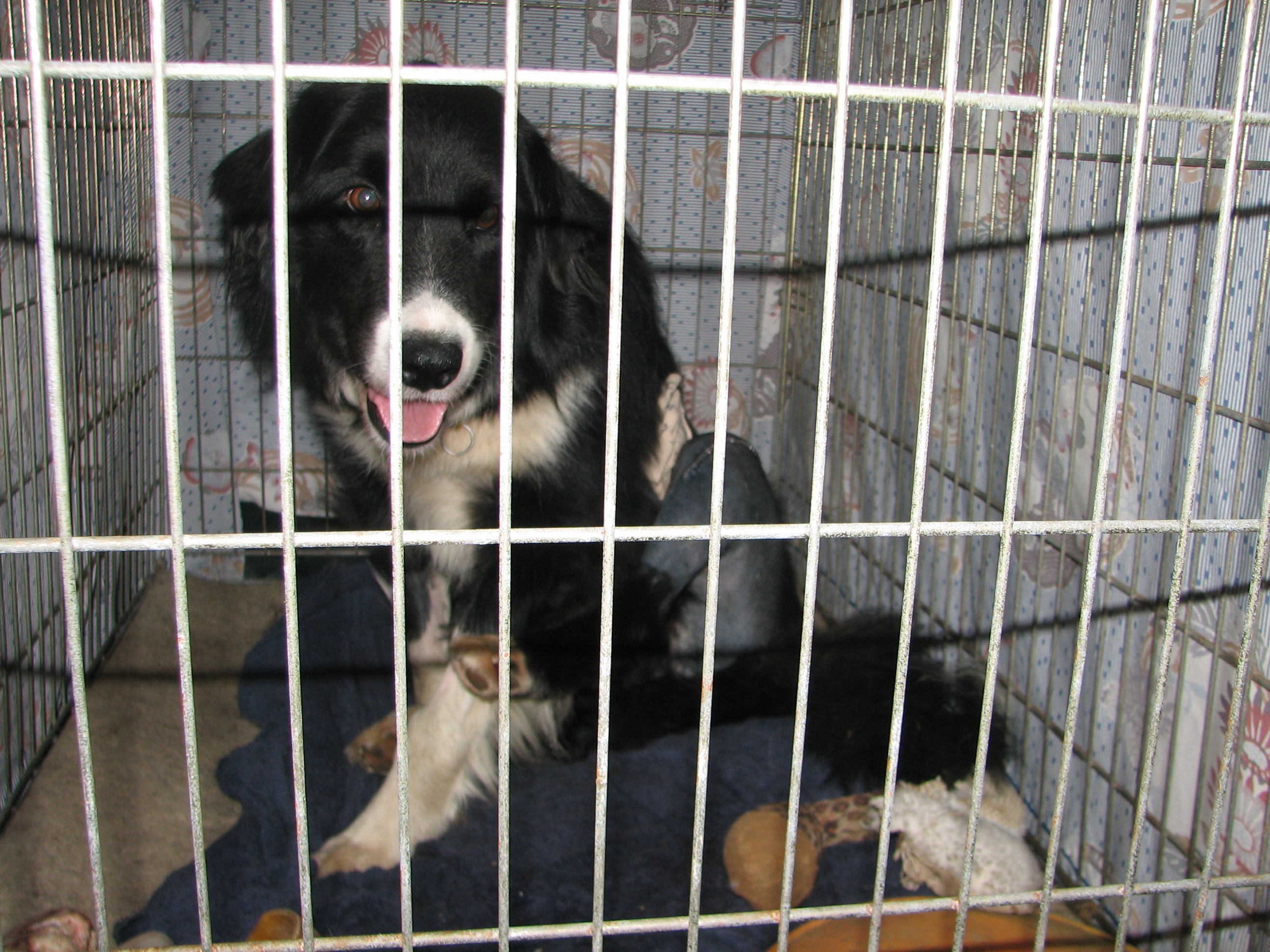 You might wonder why I am choosing to go on a rant about crates (this is a warning that a bit of a rant is headed your way). In an attempt for full disclosure- I have a wire crate with the door closed, behind me with a puppy snoozing in it. Crates can help with housetraining and transporting dogs. They can keep our houses safe when we aren’t around to manage a destructive dog. A crate can provide a refuge for a fearful dog. My crate was providing a place where the pup could chew on a bone without having a bigger, bone stealing dog, bother him.

What I wonder is when did it become acceptable to confine an animal for most of a day, and why do we think they’d be happy with it? “My dog loves his crate!” you say, and so he should, but it is my contention that the overuse or misuse of crates is contributing to many of the behavioral problems owners and trainers are experiencing. Want a puppy? Be sure you have a crate! Work 12 hours a day? No problem, get a crate! Have a young, developing dog who is exploring his world with his mouth? No worries, get a crate! Need some time to relax and not deal with a dog seeking attention? Stick him in a crate! Housetraining a puppy and don’t want to risk your carpets? Confine her to a crate!

Young dogs can suffer the most from excessive confinement. While their brains are developing, instead of exploring and learning lessons from the world and other dogs, they are stuck in a crate. One of the most frustrating questions I am asked is how to stop a dog from barking while left alone in a crate, especially when they are left for far too long. Dogs are social animals and being left alone can be scary. I realize that it is flippant and unrealistic in many cases telling someone that not leaving a dog in a crate is a good way to stop them from barking when they’re in it. People have chosen a dog and do not have the time needed to adequately address their needs, and have a houseful of shoes and table legs they prefer not to have chewed. So now what? Let the punishment begin! Spray the dog, put a bark collar on it, throw things at the crate, yell at the dog. It’s the beginning of a downward spiral.

As for loving their crates-I love curling up in my bed with a good book, but not for 16 hours out of 24. I’d especially be unhappy about not being able to do more than just stand up and turn around while I was in it for that much time. If there were other dogs or people in the kitchen or playing games in the living room, I’d probably want out. If I heard a spooky noise coming from the basement I’d probably want the option to either check it out or get the heck out of the house. To make it worse if I had no way of knowing (as young, inexperienced dogs don’t) that my confinement was limited I might begin to become stressed and anxious when I had moments of really wanting OUT and had no idea when or if that was going to happen soon enough for my liking. The alternatives of being tied up outside or left alone in a fenced in yard is not much better and can lead to an array of behavioral problems.

The lack of exposure to novelty is one of the leading causes of fear based behaviors in dogs. It is during their early months when this exposure is key to the development of tolerance and resiliency. Puppies who do not have the opportunity to have social interactions with other dogs, children, men with beards and hats, can become fearful or aggressive.

Keep your crate but use it thoughtfully. Plan crate time for when a dog is most likely to appreciate it. Build a dog’s comfort with their crate by making it a place of good things and allow the dog the choice to leave BEFORE they become upset and have bad associations with it. Most of all, be realistic in your expectations for these fabulous, sensitive creatures we choose to share our lives with and who don’t have much choice in the matter themselves.