Subscribe to Our Newsletter
By fearfuldogsPublished On: April 8th, 2009 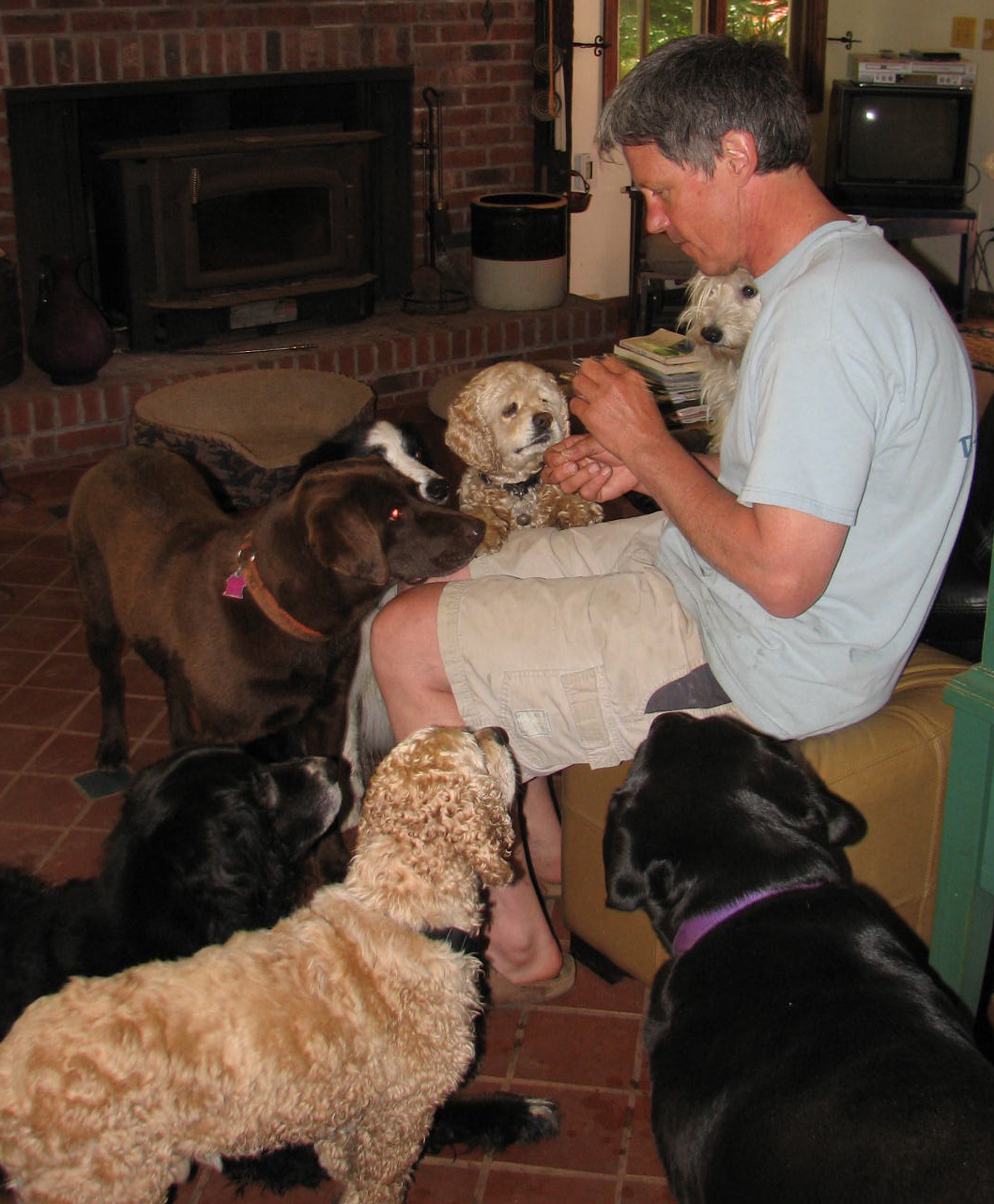 I never gave much thought to the risks of using corrections when training dogs until Sunny, my fearful dog came into my life. Even the casual ‘uh uh’ that I would use when one of my other dogs’ noses was getting precariously close to the cheese on the coffee table, would have sent him cowering off. I had to find ways not only to get this dog comfortable with me, but I also had to train him. How can you train a dog if you can’t correct inappropriate behavior?

I have come to realize that the answer to the question in most situations is that unless a dog has a crystal clear understanding of what is expected of them and been give the opportunity to practice it repeatedly, there is no disobedience. I may not like the behavior, I may want the dog to do something differently, but the dog is not being disobedient or bad. Some trainers might say that any behavior performed by a dog which is not what was requested of them, is due to ineffective training, the handler’s problem, not the dog’s.

I have more thinking to do on that one, but have learned from my scared dog that his failure to perform a certain behavior usually has to do with something making it difficult for him, something scaring or distracting him. In effect he is not unwilling, as much as unable, to do what I ask him to do. This does not mean that it is OK for him to not follow through when asked for a behavior, it means that I need to think about how to make it so he can perform the behavior, and we can practice it. Raising my voice, snapping his leash or some other form of correction would only turn him into the scared zombie I worked so hard to vanquish from the corner of our living room.

I provide kennel-free boarding in my home. The folks who bring their dogs to stay with me are among the best pet owners on the planet. Yet almost each one assumes that their dog is being disobedient when it does not do what is asked of it. When dogs and owners arrive at my house for the ‘meet & greet’ during which I assess whether we are a good match, I let dogs have a roam around the place and meet other dogs. At some point I want to determine if we share any common language, I offer the dog a treat and ask for a ‘sit’, trying out a couple of common hand signals and body postures for the cue. If the dog does not know how to sit when asked their owner tells me.

Dogs which have been trained and are comfortable may try to gobble up the treat or if I have managed to say or do something the dog understands, they snappily put their butts down. But many dogs will not sit and to date few owners have ever responded with anything other than ‘S/he knows how to sit!’ at which time they usually raise their voice and say, ‘FIDO SIT!’ as if the problem was that their dog did not hear me or needed to be addressed with more forcefulness. Fido may turn his head at the sound of his name and then refocus on me, I am after all the one with the cheese stick, or he turns and goes to his owner, often displaying appeasement body language, unsure why he was just shouted at. For a nervous dog this does nothing to lower their stress level and few dogs can arrive in a new place, be surrounded by strange dogs and humans and not feel somewhat unsure and stressed.

I know that owners feel like they are being tested and that I am checking to see how well trained their dogs are, but I am not. I am looking for common ground to establish a relationship with their dog. I don’t doubt that their dog does know how to sit when asked, but realize that they have not had the chance to practice this behavior in enough places, with enough distractions, being asked by enough people, to be able to perform it their first few minutes with me. But if even great pet owners can be unaware of the fact that dogs do not generalize behaviors easily, what of the other dogs that are living with people quick to assume that their dogs are being disobedient and just as quick to correct/punish them for it?*

When I was growing up, before she headed off to work, my mother would leave pieces of white paper, from small notepads (this was pre-Post Its), on the kitchen counter. After school I would return home to find these pieces of paper with benign chores for me to perform written on them. Dust the woodwork, vac the living room, peel potatoes, and the like, nothing horrible except that they were being requested of a kid who would have preferred watching TV, going outside to play or just do nothing. I began to dread seeing those slips of white paper. It was years later when I realized how I had been conditioned to feel a certain way about those bits of paper.

My mother sent a care package to me while I was away at college. The box made me feel happy and excited to see what was inside. After slicing through the tape that sealed the box I lifted the flaps and there on top of my prizes was a slip of white paper on which she’d jotted a note. I felt my stomach tighten and drop. The note was short and positive, “Enjoy! Love, your mother” yet it had elicited in me the same feeling of dread I had experienced for years as I had when I was growing up and saw those too familiar sheets of white notepaper asking me to do something I didn’t want to do. I knew it made no sense, the box had good stuff in it, but I could not help that initial reaction.

We can create similar feelings of dread in our dogs when we pair training with corrections. For some dogs it may not make much difference, they can tolerate a raised voice or collar yank without so much as batting an eye, but for many other dogs their intial reaction to being ‘trained’ may be an immediate feeling of concern or dread, especially when they do not understand why they are being shouted at or yanked. The timing needed to make punishment effective is not a skill that even many professional trainers have. Unsure of what is expected of them dogs may delay their response, trying to sort out what to do next in order to avoid or prevent the correction. Unfortunately this can create a cycle of increasingly harsher ‘corrections’ which unless the dog catches on quickly, can escalate into a situation which many trainers are familiar with, the owner who professes to have ‘tried everything’ to get their dog to behave the way they want. It’s good for business, but not so good for the dog whose owner throws up their hands and delivers it to the nearest shelter.

While it is important that owners of fearful dogs pay careful attention to how they work with their pets, it’s worth any pet owner reconsidering the use of corrections when training their dogs. It doesn’t mean that you let your dogs go for the cheese on the table, you train your dogs to understand a cue which means stop what you’re doing and check in with me for more information.

As for me and those white slips of paper- I got over it, must have been those peanut butter filled, glazed, chocolate cake treats that began to accompany the notes.

*Punishment is anything that causes a behavior to decrease. Corrections are used to stop behaviors that are not the ones being asked for (stop not sitting!, stop not coming!), so are punishment.