It Doesn’t Have To Be Tough Love

Subscribe to Our Newsletter
By fearfuldogsPublished On: January 18th, 2010 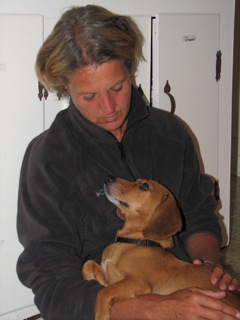 Last spring I took care of a friend’s dog, a young Rottie, named Abby. Abby was living in a family with a senior Rottie and 3 young children. She was a great dog and any challenging behaviors could be chalked up to age and inexperience. While she was with us I treated her as I would my own dogs. We worked on life skills such as not rushing out doors, waiting quietly while I prepared meals, and playing nicely with others. She was a quick study and we all enjoyed having her here.

Not long after Abby’s visit my friend commented that it seemed as if they had dropped off a puppy and brought home a dog. I felt a mild blush from what seemed like a compliment, until she added, “It’s like we sent her to doggy boot camp.”  The implication made me cringe. Boot camp is rigid, demanding and often demeaning. I was surprised at her assumption that anything that improved her dog’s behavior dramatically must have resembled ‘boot camp’. I knew she meant no insult, but I felt a sting.

Abby had played and was rewarded with food treats when she came when called, sat when asked and responded appropriately with other dogs. I prefer to think that what I offered Abby was a few days at language camp. She learned some common words and had the ‘culture of human’ more clearly explained to her. I was pleased to hear that Abby went home with more of an understanding of how to live with people than she arrived with, but I hope that word of mouth about what I offer dogs does not include the ‘boot camp’ analogy.

It’s not about whipping them into shape, it’s about helping them understand and interpret what the people in their lives expect of them. You can love them if you like (or can’t help yourself), but there doesn’t have to be anything tough about it.