Sometimes the choice should be theirs

Subscribe to Our Newsletter
By fearfuldogsPublished On: March 29th, 2010 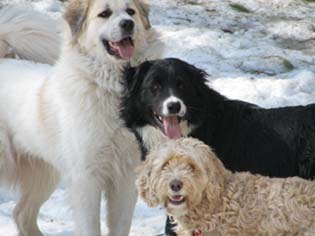 Years ago when I studied martial arts I was being instructed by a black belt in the class. I was trying to learn how to grab someone by the wrist and flip them over my shoulder. The instructor would grab me by the wrist, turn her body, put my forearm on her shoulder, bend over and whoosh! my body followed and I landed with a thump on the mat. Then it was my turn. I’d grab her wrist, turn my body, try to get her forearm on my shoulder and it wouldn’t work, I was doing something wrong. Had I grabbed the wrong wrist, put her arm on the wrong shoulder, turned the wrong way? I never had time to figure it out as she would once again grab me by the wrist, repeat the process, “Like this!” she’d say, and whump! there I was back on the mat.

Along with my body beginning to ache, I was feeling frustrated and embarrassed. Why couldn’t I figure it out, why did I keep making the same mistake over and over again? I knew I could learn it, I’d learned harder things in my life, but with each wrong attempt all I got in response was another physical manipulation through the motions, motions that I needed to translate, as if in a mirror. Kids are very good at this, being excellent at imitating behaviors, as an adult learner I was at a disadvantage. I knew what I needed, I needed a clear description of what I was to do, ‘grab the right wrist, turn your body counter clockwise’, etc., and I needed time to process the information. Given the culture of martial arts I did not feel as if I could explain to the instructor that while her technique might work well for the kids in class, or even others of the more astute adults, all I was getting from the exercise was a sore shoulder. I finally got it once or twice, more by chance than understanding, and called it quits.

Over the past several weeks I’ve been attending classes with Suzanne Clothier, during which we are learning techniques and skills for working with and helping shy and fearful dogs. This has been very exciting because over the years I’ve attended obedience and agility classes with Sunny, none of them were focused specifically on shy dogs. I’ve worked with classes for shy and reactive dogs, my own dog not in attendance. So the opportunity to have Suzanne’s eyes on both Sunny and me, has been great. I appreciate being coached through new exercises and getting new ideas for handling shy dogs to help them learn new behaviors and emotional responses when faced with something potentially scary to them.

The underlying theme of all of the exercises, is that the dogs are given the opportunity to chose how close they get to things that scare them. They receive both positive and negative reinforcement for moving toward a trigger, in this class the trigger being people. Through the process it is the dog making the decision as to how close they want to get to what scares them, and when done properly, most dogs begin to chose to move closer to people, and receive reinforcement for doing so. The patterns for this behavior are being built into the dog’s brain, and it’s a skill the dog owns and is not dependent on cues or instructions from their handlers.

For a dog like Sunny the prognosis is not as hopeful compared to others. There are some aspects of brain development that given the information and resources we have now, are immutable. During periods of development there are brain cells which are primed and ready to learn the job they were designed to do. And although there is evidence that other brain cells can step up to the plate if certain specialized cells are missing or damaged, it may be difficult or impossible for us to know how to encourage this to happen. An example of how the lack of stimulation during brain development causes life long deficits is the gruesome, but informative study done on kittens, which showed that after having one eye sewn shut during early months of development, that eye, when finally exposed to visual stimuli remained blind, though the structure of the eye itself was not damaged. The nerves and brain cells which would have been devoted to sight in that eye moved to the other eye and did their job there instead.

For dogs the sensitive periods of brain development during which the dog learns social skills both with dogs and people, and the ability to deal with novelty and changes in their environment, occur early in their lives. By the age of 4 months a puppy is already seeing this window of opportunity begin to close. There is also evidence that some patterns and responses, once established, will be difficult or impossible to change. Imagine how successful you’d be at  learning not to startle when exposed to loud crashes occurring at random times. On a more positive note, brains are more plastic than ever imagined and so continuing to work with a fearful dog, in ways that promote the development of new pathways of information in their brains, may lead to positive changes in a dog’s behavior.

How a dog is exposed to stimuli and how they are allowed to process it is important. In much the same way that someone learning to play the piano is likely to become more skilled by having the opportunity to learn to move their fingers on their own, rather then having someone push down on them to show them the right notes, a dog which is given the opportunity to work out the correct behavior on their own can end up with a different set of skills compared to a dog forced into performing a behavior.

Sunny has proven to be a quick study when it comes to learning new behaviors and tricks when he’s not anxious. He has developed skills which can help him cope until we can lower the intensity of a trigger. I have also learned the difference between when he is coping or merely surviving in a situation. I know when I can ask more from him and when I need to lower the pressure on him. Like most dogs I think that Sunny mainly wants to feel safe and have fun. My goal continues to be providing him with the opportunities for both while new skills are learned on the coat tails of security and a balletic midair catch of a frisbee.