Take It When You Can Get It

Subscribe to Our Newsletter
By fearfuldogsPublished On: September 29th, 2013

In November Sunny will have lived with us for 8 years. He has remained wary and afraid of my husband for those 8 years. There are likely a variety of reasons for this. John is a man, dogs tend to be more afraid of men than they are of women. Early on in their relationship there were several events that scared Sunny, quite literally sh**less (it usually fell on me to clean up after those episodes). One day the metal food bowl that John was carrying dropped and chased Sunny down the stairs where he slammed into the wall before recovering and getting into his safe spot under my desk where he hid out for hours. One day during a run John tripped and fell, Sunny on a long line emptied his bladder on the spot. There was the flexi-lead debacle that I describe in my blog post Don’t Take My Lead On This One!

Another factor could be that as much of a nice guy and dog lover John is, he’s not into dog training in the same way I am. He works away from home, I work at home. By virtue of that arrangement I have had more time to work with Sunny and more inclination to do so. Tagging along with this is “I wish I knew then what I know now.” Since it has fallen on me to come up with ways to help Sunny, and early in our time together I was not up to speed on exactly what those ways should be, mistakes were made. Both Sunny and John lost the motivation to work on their relationship. Neither got enough positive reinforcement.

All relationships require positive feedback. It’s not easy to live with a dog who is afraid of you. People will converse longer with someone who offers a nod or smile, compared to someone who does not. Humans and dogs seem to share this as motivation for engagement. Live with a dog who avoids you and runs for cover when you appear and there’s not much “feel good” value to the relationship. As for the dog, well, they’re feeling fear and that’s worse than being snubbed.

For years John has been happy to go into the yard and toss frisbees for Sunny and Finn. John likes to count and see how many frisbees Finn can catch and the dogs just love the game. Gradually I’ve seen Sunny’s reaction to John’s evening return morph from what was complete concern to a mix of concern and frisbee-tossing-anticipation. This felt like an improvement.

Recently something changed. Several times during the past couple of months John has joined me and the dogs on our woods walk. Initially he came along to get the trails ready for winter skiing. He toted a chain saw or pruning shears to clear downed trees and build walkways over the streams that will ice up your skis if you break through the snow. I brought treats. Sunny preferred keeping John in sight, and his preference extended to seeing John walk away from him, rather than toward him. I doled out the treats whenever John was nearby. As the number of our walks together increased Sunny’s comfort having John on the trails with him increased as well. Off leash Sunny is able to choose his proximity to John. I even managed to convince John to toss a treat to Sunny now and then when Sunny came up behind him.

Yesterday I watched as the dance of desensitization, counterconditioning and training between the two occurred. Initially Sunny would get within 5-6 feet of John who was ahead of him on the trail. John would stop and toss a treat for him and keep walking. After eating the treat Sunny would move back to within 5-6 feet of him, and another treat would be tossed. In front of my eyes I watched Sunny decrease the distance between the two of them until he was taking treats from John’s hand. Today the same thing happened. At one point John stopped and tried to lure Sunny to his extended hand with treats, but Sunny would have nothing to do with it, but seconds later after performing the “move toward man” behavior on his own he happily took the offered treats. 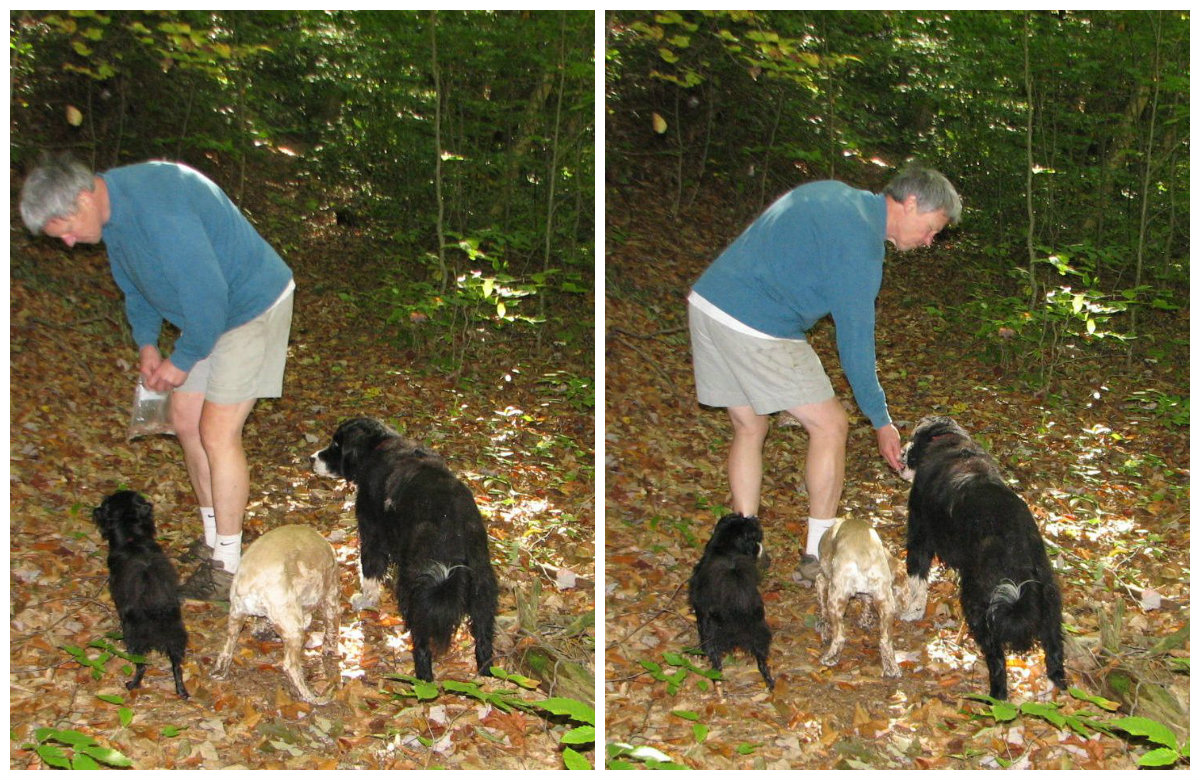 By the end of the walk Sunny was able to take treats even if John was facing him.

Everything about the “picture” of the trigger (John) mattered to Sunny. I complimented John on his ability to hand out treats without scaring Sunny. He responded, “I’m not looking at him and keeping my upper body turned away from him.” Bravo! Eight years of living with my chattering on about fearful dogs was not for naught!

Some would say that it has taken 8 years for Sunny to make these gains with John but it’s as much based on the fact that it took 8 years for John to find that tossing treats while walking with Sunny was worth the effort.

P.S. Sunny missed out on positive experiences with people and novelty during the first year of his life. There is no “do-over” for the lack of whatever needs to happen during critical periods of development in a dog’s life. He has learned skills to be comfortable around people, but he will never be like a dog who had the benefits of play and enrichment with people during the first few months of their life. Sorry to break it to you if you were unaware of the importance of early puppyhood experience.